This is a post I wrote for the Vision Room in September of this year.

I say a lot of things I don’t actually do. I don’t intend to lie, or even drop the ball. It is just that I don’t seem to be able to execute consistently what I envision in the future. The gap between what we say and what we do can be hard to acknowledge. In fact, I used to really beat myself up for this, but as it turns out, I am not alone in this gap between what I espouse and what I actually produce. Even Paul in Romans points to this gap: “For what I am doing, I do not understand; for I am not practicing what I would like to do, but I am doing the very thing I hate.” (Rom. 7:15) Not living according to our aspirational values is part of the human condition, but not all of us address this dissidence in a way that results in reducing the gap.

I first became aware of this as a theory when reading a book by Chris Argyris (Strategy, Change, and Defensive Routines). At its root, the idea is that we all have two theories in our head at any one time:

At times, these two theories are perfectly aligned and our behavior is exactly what we want it to be, and exactly what we said it would be. Of course that builds credibility and trust in our relationships and we should strive for this all the time. Other times, the distance between our espoused and lived-out values can be visible and even painful. How do we, in those times, create more alignment between our aspirations and our actions?

When we notice this misalignment, consider it a great learning opportunity. Having the self-awareness to recognize the gap is a critical first step. Rather than beating yourself up over the gap, I suggest you respond carefully:

As leaders in our organizations, sometimes we are more aware of our co-workers’ inconsistency than our own, especially when we are in the supervisor role. How do we deal with that?

For yourself, think about the past week — is there any situation where your behavior did not match your espoused beliefs? Go address it in your own heart and then with the other person immediately.

For others, have you judged someone too harshly? Go apologize and reengage them to give the benefit of the doubt. Be prepared for hesitancy and defensiveness in that person. That is to be expected and is simply part of the process.

A few weeks ago I wrote about How Come, a phrase that has helped me understand my own thinking process and all the inferences I make along the way. The corollary to that is What If. I use How Come to understand a conclusion I (or others) developed. I use What If to imagine a different possible future.

Ask Through the Fear

Years ago I was consulting to a large manufacturing company and we were talking about how to make the organization way more efficient. They had just lost a major contract accounting for about a third of their business. As a result, their operating costs were way too high for the level of production they could sell. I was working with a group of folks from around the company to figure out the future and there was a lot of fear in the room. As we talked about that fear, the largest theme was, “if we get more efficient, will I lose my job?” With that level of personal risk at stake, the willingness to find great solutions was, let’s say, limited. These folks were legitimately concerned for their future and they had played the What If game. What If we get more efficient…then I will be unemployed…and that is scary.

We took a break and my colleague Jon Thorne briefed me on our next step. “We are going to play the What If game, but we are not going to let them be lazy about it.” I learned a lot from Jon, and this was a big one. We went back into the room and asked the team, “So, what if you lost your job…what would happen next?” And what if that happened, what comes next? And so on.

As it turned out nearly everyone in the room had lost a job before in their life for one reason or another, and they were all just fine. In fact, many of them told stories about how losing that past job was a great blessing in their life that opened doors they couldn’t imagine.

About a year ago, several of us flew our hot air balloons over Pikes Peak in Colorado Springs. I mentioned the plan to a fellow pilot and asked if she wanted to join the flight. Her first response, as I recall, sounded like, “I could never do that, I just don’t have the experience.” In this case, she might have been right, based on the assumptions she was making. See, I was calling to ask if she wanted to go with me, not alone. Our assumptions about the world limit our willingness to engage in the possible. I asked, “What if I flew with you, would that change things?” When we reframed the conversation, she was all in.

I mean ALL IN. She was gung-ho to plan the flight, gather all the crew and equipment required. She executed the flight flawlessly and even wrote an article for our national magazine about the experience. She and I now have a shared experience that was so much fun and we have developed a great friendship. What she doesn’t know is that she did way more for me than I did for her. Sure, I brought some experience and knowledge to the table, but she brought learning and excitement that keeps me fired up to this day.

Next time you feel the fear of a situation, play the What If game. Keep playing and asking What If until you feel your fear dissipating.
Next time you hear that internal voice say you just can’t move forward…ask what if I could.
What would it take to go out and seize the day? 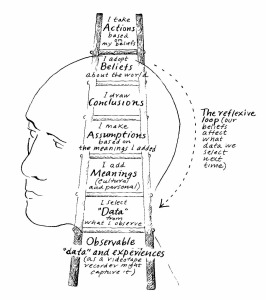